Text classification as an important task in natural lanugage understanding (NLP) has been widely studied over the last several decades. The task describes input as a document and output as the category of which the document belongs to. In literature, both supervised and unsupervised methods have been applied for text classification.

This blog only sets its scope on supervised learning methods. More specifically, it only focues on deep learning supervised methods that have gained great success in recent years. For knowing about latest advances of unsupervised methods in text classification, here is a recommended recently-published paper (Haj-Yahia, et al., 2019).

This blog amis to use three different deep leanring methods for text classification on three datasets. The code repository associated with this blog can be found here. Three datasets used in the blog are 5AbstractsGroup, SST-2 and reddit_jokes. These datasets are conditioned under license so you need to download them through their original sources.

The structure of the blog is organized as follows.

tokens in a sequence given a token at time step

can be represented by a vector

through an embedding layer. The LSTM unit takes

). It summarizes important information by remembering or forgetting information through the recurrent process. It ends up with a vector that summarizes the whole sequence at the last time step. The last vector is normally used as representation input of subsequent feedforward layers for generating probabilities distribution over all classes. Unlike LSTM only summarizing information in one direction from left to right, BiLSTM sees context of a token at time step

in both left-to-right and right-to-left directions (as you can see from Figure 1 (b)). To better understand how LSTM/BiLSTM works, one point worth bearing in mind is that, in the recurrent process, all stuff are represented by vectors so that complicated mathematic functions can be leveraged on.

If you are not so familar with LSTM and avid reading learner, here is a recommended learning route for LSTM.

Back to the blog’s focus, the following graph presents the architecture of a simple BiLSTM model that are trained on the three datasets. It embeds the text first (through glove.6B.100d) and then encode it with a BiLSTM Encoder, and then pass the result through a feedforward network, the output is used as the scores for each label. The model is implemented with reference to AllenNLP’s built-in basic classifier. 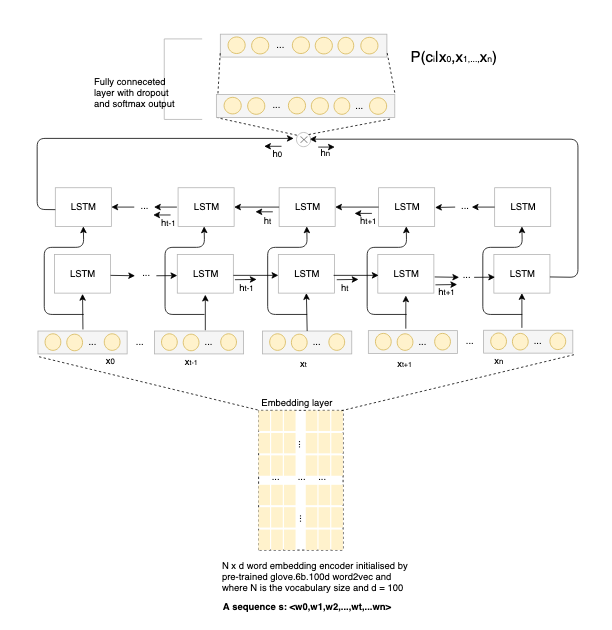 In terms of experimental setup, examples are processed in batch of 64 and trained in 40 epochs with patience=5 for early stopping based on accuracy evaluation on development/validation set. Adam with learning rate 0.001 is used as optimizer and cross entropy is used as objective function. The experiment is run on a single nvidia RTX 2060 6GB GPU. With this GPU configuration and simplicity of the BiLSTM model, any one of the three experiments for each dataset is run no more than 3 minutes. The evaluation is reported on the predictions for test set except that SST is evaluated on development set.

Going deep into the model is beyond the scope of the blog. To know its internals, have a look at my previous blog that guides you to understand BCN+ELMo. For implementation, the model is designed based on a condensed version of the original one in AllenNLP. The original model is bigger where d is 300 (see the following graph), whereas I adapt it to be 100. In addition, the glove embedding I used is 6B.100d instead of 840B.300d as in the original. I change the model to be a smaller one in order to well suit my local hardware’s capacity. If hardware like GPU or TPU are guaranteed, it is suggested to try the original that may give better performance. Basically, I adapted the BCN+ELMo structure to be as shown in the following graph. As presented in ELMo paper, there are four pre-trained ELMo models different in size. I used the original one with 93.6 millions. Check here to know different-size pre-trained ELMo models. 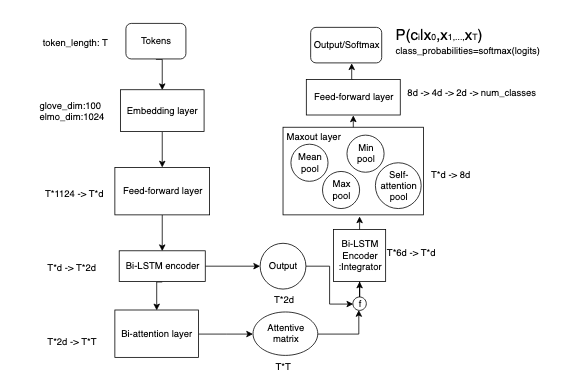 Regarding the experimental setup, most of hyper parameters like learning rate, optimizer and number of epochs are kept as the same as in BiLSTM experiment. The only difference is that the batch size is changed from 64 to 16. Still, this is because the CUDA out-of-memory issue can be avoided if giving a relatively small batch size. Due to more complicated architecture of BCN+ELMo, the training time is a lot longer than BiLSTM. It is estimated that training BCN+ELMo on any of the three datasets is more than 30 minutes.

BERT (Bidirectional Encoder Representations from Transformers) was proposed by Devlin, Jacob, et al., 2019 that has gained great attention in NLP community due to BERT’s powerful performance in many sentence-level language tasks. BERT is similar to ELMo for building contextual representations. However, BERT is a Transformer-based architecture that only applies self-attention mechanism to pre-train a language model (Attention is all you need). Unlike ELMo that is trained on a LSTM-based Bi-LM (Bidirectional Language Model), BERT is trained with a different language modeling objective called masked language modeling. There are two different-size BERT pre-trained models in publication. The following table (credit: Munikar, et al., 2019) shows BERT_base VS. BERT_large. In experiment, I used the base version.

If you are not so familar with BERT and avid reading learner, here is a recommended learning route for BERT.

In the experiment of using BERT to do classification, I adapted the BertForSequenceClassification model in 🤗 Transformers to fine tune on my prepared three datasets. The train batch size is set to be 8 (you may change it to a proper number compatible with your hardware) and number of training epochs is 3. Other hyper parameters keep the same as default in 🤗 Transformers. Due to the fine-tunning process requiring only a small number of epochs in BERT, it doesn’t take long time to finish training on the three datasets. In next section, I will report experimental results showing how different models influence performance given different dataset domains.

Taking a look at performance of the three models on redditjokes, we found the results are poor and not reliable. I doute this is an example of wrongly defining a machien learning problem. I explain the issue with such a possible reason. The ground truth of redditjokes is orignally the post scores on Reddit. These scores only represent the public’s opinions on a joke. This kind of subjective opinions break groundtruth so such a task is hard for machines to find patterns between classes. A lesson from this task: enabling machine the ability in identifying the level of humor given a plaintext human-written joke is what François tweeted: “For all the progress made, it seems like almost all important questions in AI remain unanswered. Many have not even been properly asked yet”. Anyway, I think how to enable machine with humor remains an interesting and serious research question in the future. Due to the mistake here, I will ignore discussing performance on redditjokes in the following part.

Now, if we have a look at the evaluation scores of BiLSTM, BCN+ELMo, BERT on 5AbstractsGroup, and SST2, we found BCN+ELMo improves the performance to a large extent in comparison to BiLSTM. This is likely due to the application of bi-attention mechanism in BCN+ELMo. Although BERT achieves the best performance among the three methods on both datasets, it only improves the performance slightly on 5AbstractsGroup compared to BCN+ELMo. However, BERT hits good scores in all metrics on SST2, with 0.9268 and 0.9266 in F1 and accuracy respectively. These scores are also competitive with state-of-the-art accuracy in GLUE benchmarking lederboard. The experiment with BERT only applies the small-version model and it is expected to further improve accuracy if applying the large-version model or further tunning hyper-parameters. It is also an interesting future work to compare performance by appling other state-of-the-art models such as XLNet, RoBERTa (that are easily accessible via the 🤗 Transformers library). Overall, as the experimental results revealed, BERT has an advantage over the other two methods in the classifcation tasks. More specific evaluation report on each class of each dataset using each method can be accessed here.

This blog presents three commonly-practised deep methods for text classification, namely, BiLSTM, BCN+ELMo, and BERT. Three datasets are given to test the performance of the three methods. Although methods like BERT nowadays have achieved a very good performance not only in text classification but also other language understanding tasks, many research problems still remain to be tackled in the future. For example, a recent hot topic around AI is GreenAI (Strubell, Emma, et al., 2019; Roy Schwartz, et al., 2019; Sanh, Victor, et al., 2019). GreenAI emphazies future research should not only blindly pursue accuracy but also care about carbon footprint produced by training big deep models. As the tweet puts: “The future is not about bigger models, it’s about bigger ideas”.

For all the progress made, it seems like almost all important questions in AI remain unanswered. Many have not even been properly asked yet.

If you have any doubts or any my mistakes you found in the blog, send me an email via wangcongcongcc@gmail.com or you are welcome to talk with me about any NLP relevant questions through my Twitter account.